I had the very great pleasure of seeing Ray Davies perform at the Jack Singer last night. He put on a fantastic show; better, I think, than the time I saw The Kinks play in Vancouver in 1981. I was really expecting him to stay away from the older Kinks songs, but he and his accompanist played a whole whack of my very favourites along with material from his new CD (which is very good): "Well-Respected Man", "Dedicated Follower of Fashion", "Tired of Waiting", "Set Me Free", "I'm Not Like Everybody Else", "Sunny Afternoon", as well as the obvious ones you would expect like "All Day and All of the Night" and "Lola", which he saved for the very end just like in 1981, after teasing the audience with the opening chords several times. He insisted on audience participation, so we all sang and had a great time. It was like an evening with an old friend -- he seemed to be enjoying himself as much as we did, and he played for a good hour and a half. Probably the best live concert I've ever been to.

Lori Hahnel
Lori Hahnel writes and teaches in Calgary. She is the author of a novel, Love Minus Zero (Oberon, 2008) and a story collection, Nothing Sacred (Thistledown, 2009) which shortlisted for an Alberta Literary Award. Her credits include CBC Radio, The Fiddlehead, Prairie Fire and The Antigonish Review. Work is forthcoming in Rubbing Stone: A Nose Hill Anthology. She is marketing a second novel and is at work on more stories.

I have done manuscript consultations on behalf of The Writers Union of Canada and during my term as writer-in-residence for The Canadian Authors Association in 2009 / 2010, as well as editing on a freelance basis. If you are interested in consultation on fiction manuscripts, please contact me at lori@lorihahnel.ca 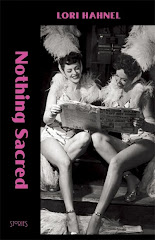 Nothing Sacred and Love Minus Zero are available through: